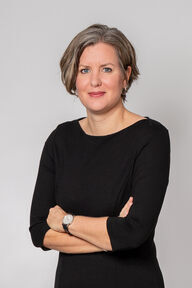 Janina Fels is director of the "Chair for Hearing Technology and Acoustics" since November 2020. From October 2012 until November 2020 she has been Professor for Medical Acoustics at RWTH Aachen University since October 2012. She studied Electrical Engineering specializing in Electrical Communication Engineering (Diploma 2002) at RWTH Aachen University and received her doctorate there at the Institute of Technical Acoustics (PhD in 2008). Her dissertation researched the development of binaural hearing and impedances to the ear canal from children to adults with measuring and simulation procedures.

She has been in charge of the study group "Medical Acoustics, Binaural Technology, Spatial Audio, Audiology and Psychoacoustics" at the Institute for Technical Acoustics at RWTH Aachen University since January 2008. She did a post-doc in 2009 on the further development of ear simulators for children for the development of hearing aids at the "Center for Applied Hearing Research (CAHR)" at the Technical University of Denmark (DTU) and at Widex, Denmark. From December 2012 until October 2015 she was Guest Researcher at the Institut für Neurowissenschaften und Medizin, strukturelle und funktionelle Organisation (Institut for Neuroscience and Medicine, Structural and Functional Organization of the Brain) (INM-1) at the Forschungszentrum Jülich.

She was awarded the Lothar-Cremer-Prize by the Deutsche Gesellschaft für Akustik (German Society for Acoustics) in March 2013 for her innovative and groundbreaking work in the fields of binaural technology and medical acoustics. She was appointed to the Junge Kolleg der Nordrhein-Westfälischen Akademie der Wissenschaften und Künste (Young Scholars' College of the North Rhine-Westphalian Academy of Sciences, Humanities and the Arts) in January 2014.

In March 2020, she was elected as a Review Board Member for the subject Acoustics (Review Board Mechanics and Structural Mechanical Engineering) in the DFG Review Board election for the term of office from 2020 to 2023.